The Rise of Black Militias:

Americans Worrying about Violent Overthrow of US Government

America has a 244 year   old tradition of peaceful transition of power.  Even when incoming and outgoing presidents have had serious political disagreements, such as Trump and Obama, the transition took place peacefully at noon on January 20.

With the current nationwide violence, Americans are beginning to worry about violence marring the transition of power.

A recent Rasmussen poll shows half of American voters worried that a violent overthrow of the US government will be attempted in the next ten years.  The” Just the News” poll by Rasmussen showed 18% thinking it is very likely and 32% thinking it is somewhat likely.  The poll was taken over July 2 – 4.

“This was a surprise,” Scott Rasmussen said.  “Upon reflection, though, it probably shouldn’t have been.”

Rasmussen noted that although the gap between Democrats and Republicans is modest, Republicans are more likely to expect such violence.  This may be due to a perception among some that the current unrest is heading in that direction.

Many Republicans fear the left will respond with violence if Trump is reelected.  Many Democrats fear the same thing if Trump is defeated.

Those most convinced that there would be violence were younger demographics – 25 to 44 years of age.  Blacks and Hispanics were more likely to see violence in the future than whites.  Those who were very liberal or very conservative were also more likely to see a violent future.

In what should be a worry, with the unemployment caused by the Corona virus at historical levels, nearly two thirds of the unemployed saw a violent overthrow in the next ten years.  Those who made less money also agreed with that assessment.

This violence was a subject of President Trump’s Fourth of July speech at Mount Rushmore on July 3rd. He attempted to deflect criticism directed at him of instigating violence,  “Angry mobs are trying to tear down statues of our founders, deface our most sacred memorials, and unleash a wave of violent crime in our cities,” Trump said.  “American people strong and proud, and they will not allow our country and all of its values, history, and culture to be taken from them.”

The Growth in Gun Purchases

That fear of violence has shown itself in the boom in firearms purchases in the past few weeks.  June 2020 saw the largest number of FBI firearms purchase background checks in history.  Handgun sales were up 177% over 2019 and rifle sales were up by 114%.  In total, more than 2.3 million firearms were sold in June 2020 – this in a nation that already has more than one firearm for every person in the nation.

According to anecdotal evidence, many rifle sales were for the popular AR-15, the civilian version of the US military rifle.

Ammunition has also been leaving the shelves of gun stores as Americans prepare for the worse.

Another interesting demographic about these increased gun sales is the first-time buyer.  While many previous gun sales have gone to current owners of firearms, in 2020 over 2 million Americans became first time gun owners.  Firearms retailers said about 40% of their guns sales are now first-time buyers.  Women, traditionally a minor firearm purchasing demographic, represented 40% of the first time buyers.

Another changing demographic is the ethnicity of gun owners.  Traditionally Whites have had the highest rate of gun ownership.  Hispanics and Blacks were less likely to own firearms.   Percentage Black ownership of firearms was only 2/3s that of Whites.  Hispanics owned less than half the guns Whites did in terms of percentage.

That is changing as Blacks are seeing the advantages of gun ownership.

The Rise of Black Militias

The idea of Black ownership of firearms has become more popular.  While some of these new gun owners have joined traditional gun organizations like the National Rifle Association, there are a growing number of Black gun organizations.  While some focus on the sporting aspect or Second Amendment politics, some are also focused on political aspects.

One group, the National African American Gun Association wants to fight the negative stereotype of a black with a gun.  While supportive of law enforcement, they worry that too many White police are likely to shoot a Black man lawfully carrying a firearm.

A dramatic change in how the Black community views firearms and their uses in self-defense was seen happened last weekend in Atlanta, Georgia.  A Black militia called NFAC (Not F**king Around Coalition) marched to Stone Mountain, the site of a Confederate memorial to protest.  The protest was peaceful.

Stone Mountain celebrates the three major persons of the Confederacy – President Jefferson Davis, General Robert E. Lee, and General Thomas “Stonewall” Jackson.  Their portraits have been chiseled into the side of the mountain.  In the past, the site has been used by White supremacist groups like the KKK.  Some have called for its destruction. 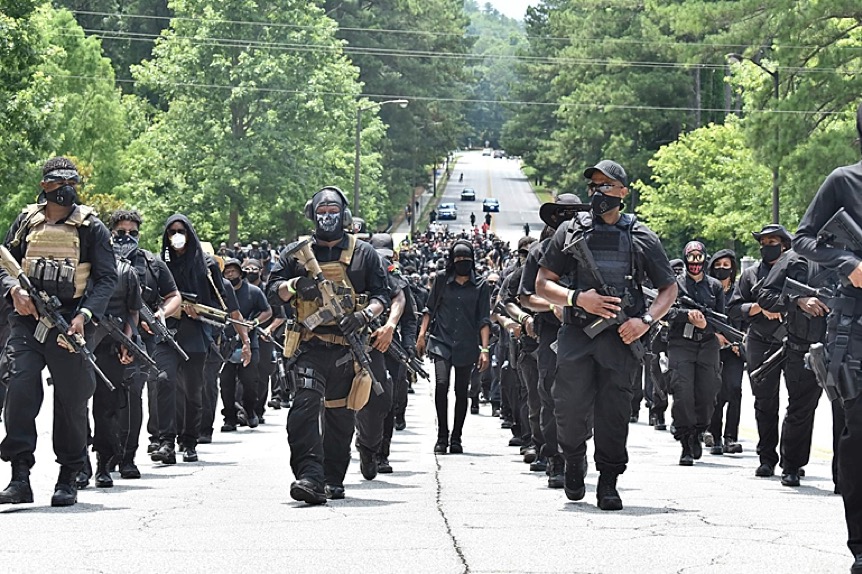 “Our initial goal was to have a formation of our militia in Stone Mountain to send a message that as long as you’re abolishing all these statues across the country, what about this one?”

“It was all Black … there were no brown people, no white people… everyone was Black. I am not a protester, I am the commanding general of my militia, we were swearing in new members,” he added.

It makes sense that a Black militia would form after the creation of so many right-wing militias.

However, the contrast to the White militias seen was dramatic.

While most White militias are small, the NFAC group was large and organized, Jay claimed in an interview that he is commending about 12000 members. Its 200 members marched in formation in black uniforms, while carrying rifles.  Georgia is a “open carry” state where citizens can carry firearms if they have permission.  NFAC said they checked to make sure persons carrying firearms had their permits before they could march.

According to Jay, many members are former military.  The political belief of the militia is Black Nationalism and their religious belief is Black Hebrew Israelites.  They claim that they are not affiliated with Black Lives Matter or organizations like the Black Panthers.  There are videos of them holding firearms practice in the past.  Many carry semiautomatic AR-15s.

The Southern Poverty Law Group has designated them a Black extremist hate group.

The NFAC said that although they only intend to protect the Black community, they are more than willing to fight White supremacist groups like the KKK.

However, there appears to be little chance of a firefight between White and black militias soon.

The NFAC still needs training (photos show many of the NFAC unit not familiar with their firearms – something that can be solved with a few days of training), while the right wing militias are focusing on limited missions like protecting monuments and memorials in their locality.  The two groups are also in different localities.  The black militias are in inner cities, while the right-wing militias are usually rural.  A conflict is unlikely unless one invades another’s territory.

The NFAC is unlikely to deploy in a 200-person unit.  What was seen on July 4thwas a publicity stunt to gain members around the nation.  Instead, the NFAC will probably engage in guerilla actions that use 5 to 10 person squads.  Tactics will be like those used in Rhodesia, former Yugoslavia, or during the Dirty War in Argentina.

However, the appearance of a large Black militia means that the unrest in America is moving into the next stage.  All sides are sure that major civil war is in the future and are gearing up by creating their own military units. 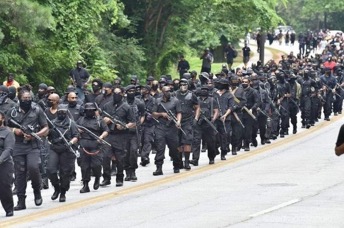